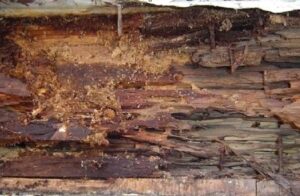 Ants are among the most prevalent pests in households, restaurants, hospitals, offices, warehouses, and virtually all buildings where food and water can be found. While mostly harmless to humans, ants (especially carpenter ants) can cause considerable building damage. Inspectors can expand their knowledge base by being able to identify some of the telltale signs of ant infestation.

Ants are social insects that live in colonies divided into three castes: queens, males and workers. Most of the ants you may observe, which are responsible for gathering food, are sterile female workers. Winged males and females will leave the nest to mate, and to find suitable locations for new colonies. After mating, the males die and the impregnated females (queens) shed their wings and lay eggs that will hatch into the legless, grub-like larvae. The queen takes care of these larvae as they develop until they finally become pupae. Within a few weeks, adult worker ants emerge from these pupae and take over the job of tending the young. 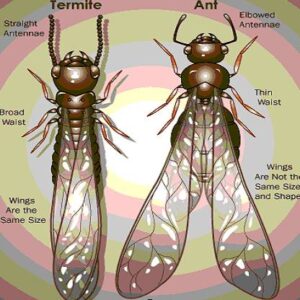 Winged ants are often mistaken for winged termites, which also leave their nests to mate. These insects can be distinguished from one another by three main characteristics:
⦁ The ant’s body is constricted, giving it the appearance of having a thin waist, while the termite’s body is not constricted.
⦁ The ant’s hind wings are smaller than its front wings, while the termite’s front and hind wings are about the same size. Wings might not always be present, however, as both species eventually lose them.
⦁ Winged female and worker ants have elbowed antennae, while the termite’s antennae are not elbowed.
Termites and ants both construct nests in moist wood, but ant nests are typically smoother and lack mud structures commonly found in termite nests. Also, termites actually subsist on wood, so the structural damage they leave it their wake is generally more severe than that caused by ants, which merely tunnel through wood.

Carpenter ants nest in both moist and dry wood, but they prefer moist wood. Accordingly, nests are more likely to be found in wood dampened by water leaks, such as wood around bathtubs and sinks, poorly sealed windows and door frames, roof leaks and poorly flashed chimneys. Nests are especially common in moist, hollow spaces, such as the wall void behind a dishwasher and in a hollow deck column. As there will often be no external signs of damage, probing the wood with a screwdriver helps reveal the excavated “galleries.” Another technique for locating hidden nests is to tap along baseboards and other wood surfaces with the blunt end of a screwdriver while listening for the hollow sound of tunneled wood. If a nest is nearby, carpenter ants often will respond by making a rustling sound within the nest. 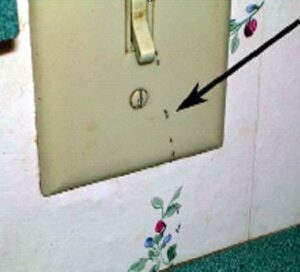 The following clues are evidence that a building is host to an ant infestation:⦁ long trails of ants, perhaps numbering in the hundreds or thousands. Ants assemble in long trails along structural elements, such as wires and pipes, and frequently use them to enter and travel within a structure to their destination. Follow the trail to locate their nest or their entry point, such as an electrical outlet, or gap along a baseboard or around a water pipe;
⦁ a few straggler ants. These are scouts in search of food and nesting sites. They, too, may be followed back to the nest to betray their family;
⦁ holes or cracks in walls or foundations, especially where pipes enter the building, and around windows and doors. These can provide entry points for ants and other insects. Kitchens are other food storage and preparation areas are particular problem areas;
⦁ frass deposits. Frass is the fine sawdust produced after galleries are carved out of the wood. If you suspect that a piece of woodwork hosts a gallery, you can tap on it with a screwdriver tip and see if any dust falls away;
⦁ a distinctive rustling sound similar to the crinkling of cellophane. Ants are small, but nests are large enough to produce perceptible noise; and
⦁ outside, inspect for nests in mulch and vegetation next to the foundation. Check under potted plants, patio blocks, stepping stones, in piles of rocks, lumber and firewood.

A number of steps can be taken by homeowners to reduce the potential for future ant problems, such as:
⦁ Store food items that attract ants, such as sugar, syrup, honey, and pet food in closed containers. Wash them to remove residues from outer surfaces.
⦁ Rinse out empty soft drink containers or remove them from the building.
⦁ Thoroughly clean up grease and spills.
⦁ Remove garbage from buildings daily and change liners frequently.
⦁ Correct roof and plumbing leaks and other moisture problems that will attract ants.
⦁ Eliminate wood-to-ground contact, such as where landscaping has pushed soil or mulch up against the wood siding of a home.
⦁ Clip back tree limbs and vegetation touching the roof or siding of the house. Limbs and branches serve as bridges between tree limb nests and the structure.
⦁ Seal cracks and openings in the foundation, especially where utility pipes and wires enter from the outside.
⦁ Stack firewood away from the foundation, and elevate it off the ground. Never store firewood in the garage or other areas of the home, as firewood is a major ant nesting area.
In summary, ants are complex creatures that create structural defects in buildings. Inspection and exclusion techniques should be practiced.